In 2019, the Indiana Laborers’ Training Trust Fund remodeled the Bedford, IN campus of its training school. On March 31, politicians, contractors, LIUNA leaders, and students finally gathered at the facility to officially rededicate the building and its grounds, a period lengthened by Covid.

Indiana Laborers’ District Council Business Manager David Frye opened the ceremony and thanked the students and instructors for their dedication and hard work in preparing the facility. “Few things symbolize the greatness of LIUNA more than this renovated training center that we dedicate today,” said Frye. “This building is so much more than bricks, mortar, steel, concrete and glass. It is nothing less than a generation’s gift to the future, just as the Indiana Laborers’ Training Center has been a gift for all of those who passed through its doors in 1968.”

Special guests at the dedication included State Senator Shelli Yoder and State Senator John Ford who has carried the Highway Safety Bill for the Laborers every time it has been introduced in the Senate.

The guests were treated to a home cooked lunch of pulled pork and sausage. 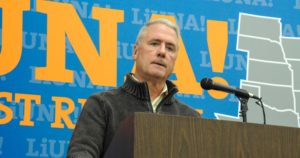 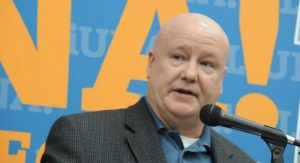