(Springfield, IL) LIUNA Local 165 member Reggie Marizetts, Jr., was a guest of Governor JB Pritzker’s for The Governor’s State of the State address. Marizetts, a first year apprentice from Peoria, IL, was featured as Pritzker spoke of the passage last year of the $45 billion infrastructure plan “Rebuild Illinois,” which is expected to result in a significant increase in job opportunities (or jobs) for Laborers and other construction workers throughout Illinois over the next several years.

“Rebuild Illinois is about more than just roads, bridges and universities; it’s about jobs: middle class careers with wages and benefits, the kind of jobs that help you raise a family,” said Pritzker. “And together, we did more to make these jobs more inclusive and diverse, by investing in the Illinois Works program to recruit new construction apprentices and set strong goals for our public works projects to include diverse employees. 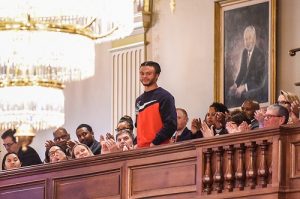 Local 165 member Reggie Marizetts, Jr. receives recognition and an ovation at the Illinois State of the State address for his “hard work and bright future.”

“With me today is Reggie Marizetts Jr., a first-year apprentice with Laborers’ Local 165 in Peoria. Reggie fell in love with hands-on work early in his life, and it’s his apprenticeship where he is learning all the skills to succeed not just now, but for decades to come.”

“Some people just want to be a YouTuber or playing video games,” he said. “Or, they can go out to college for four years and be paying every year what I’m making.”

LIUNA Vice President and Midwest Regional Manager John Penn believes all of Illinois benefits from having a young and skilled workforce. “We need more workers like Reggie in Illinois. He’s young, he’s getting the kind of world class training only LIUNA can provide, and he is on his way to a good career in construction,” said Penn.

Marizetts plans to continue his apprenticeship and hopes to become a full-time journeyman. Eventually he would like to open a father/son construction company with his dad.