In an effort to help ease the hardships caused by high unemployment and work stoppages as a result of the Covid-19 virus, LIUNA Local 477 in Springfield, IL, along with IUOE Local 965, Teamsters Local 916, and Calvary Church of Springfield, hosted a food giveaway for people in need in the Springfield area.

440 boxes of fresh fruit and vegetables were given away at the event, which took place in the parking lot of Local 477 and lasted nearly three hours as cars and trucks lined the lot and the street to receive their items. 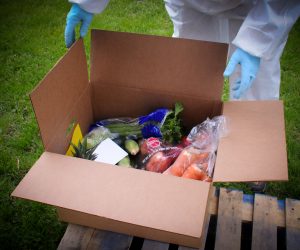 “Laborers throughout the region are such important parts of the communities where they live and work, and Brad Schaive and the members of Local 477 are a great example,” said Penn. “Whether going above and beyond during natural disasters, helping to feed people during a global pandemic, or even the day-to-day volunteer work that every community needs, the people of Springfield and surrounding areas know they can count on Local 477,” he continued.

“The success and survival of this community is directly tied to the men and women of our organization. It is our duty and profound honor to be there when they need us most,“ said Schaive.

Participants remained in their vehicles as volunteers, wearing full face masks and other personal protective equipment, loaded the vehicles in the no-touch operation. 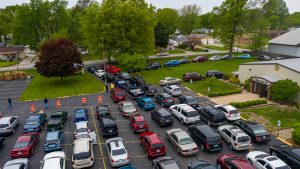