National Work Zone Awareness Week officially kicked off Monday morning with a press conference hosted by the Missouri Department of Transportation (MODOT) held in a work zone at the intersection of I-270 and I-44 in southwest St. Louis. As trucks and cars of all sizes sped by in the background, representatives of MODOT, the Illinois Department of Transportation (IDOT), MO & IL State Police, AGC and LIUNA spoke to the urgency of recognizing work zones and the perils that exist for both workers and drivers.

Representing LIUNA was Tessa Beard, daughter of Dennis Beard, a member of LIUNA Local 100, who was killed in 2012 in a work zone accident. “When I say that that was the worse day of my life, that is an understatement,” said Tessa. “My family and I have suffered from this tragic loss every day since. I feel that mine and my siblings’ childhood was robbed from us with growing up without a dad and just grieving his loss, all for something that could be 100 percent preventable,” she said.

Corporal Juston Wheetley of the Missouri State Police agreed – “When you’re approaching a work zone there are plenty of signs, so if there is anything distracting you there is plenty of time to put that distraction down before entering.”

“Our workers are basically out here putting their lives at risk, not only with the construction hazards, but with the traveling public,” said Tom Huster, President of KCI Constuction of St. Louis. “We‘re urging people to slow down, put your phones down, and pay attention in work zones.” 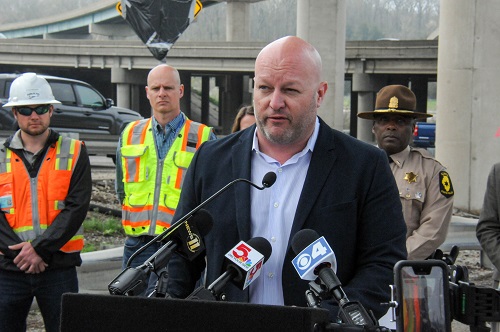 In 2012, 799 people were killed in highway construction work zones with thousands more injured. One is too many. The purpose of National Work Zone Awareness Week is to point out the extreme importance of the driving public to recognize work zones and implement safe driving procedures. “Drive Like You Work Here.”