Laborers’ Home Development Corp., a non-profit affordable housing provider, has plans to redevelop the former Paris High School into senior apartments.  Tiger Senior Apartments will consist of 42 units in a mix of studio, one, and two bedroom apartments.  The project will preserve or restore many original architectural features. The building will have an on-site management office, gymnasium, auditorium, kitchen, and lounges.  The building will be brought up to current accessibility standards and will receive numerous upgrades including masonry restoration, replacement of large existing windows, complete replacement of fire suppression, mechanical, electrical, and plumbing systems, a new elevator, and energy code related upgrades. Site amenities will include an exterior sitting area with benches and new landscaping.

Laborers’ Home Development Corporation (LHDC) was recently recognized as an Affordable Housing Champion at the Illinois Governor’s Conference on Affordable Housing, acknowledging its work as a state’s partner that made exceptional contributions to affordable housing in 2015.

Every year the Governor’s Conference on Affordable Housing awards three Affordable Housing Champion Awards for distinguished developments, initiatives or programs in affordable housing.  These nominees stand out for their commitment to serving the Annual Comprehensive Housing Plan focus areas and one or more of the State’s Priority Populations, and for having positive impacts on the community in which they are located.

With a total construction budget of $6.6 million, the building of Maple Ridge II employed more than 60 skilled union workers, giving a boost to the local economy. Maple Ridge II offers tenants quality constructed housing with many built-in amenities such as private covered porches, energy rated appliances and high speed internet.  Combined with the first phase of Maple Ridge, the community offers a total of 92 affordable apartments.

“We’re extremely proud to be able to be a part of a community like this that provides quality, affordable housing for so many people,” said LHDC Chairman John F. Penn

IHDA is a self-supporting state agency that finances the creation and the preservation of affordable housing across Illinois. Since its creation in 1967, IHDA has allocated $12.4 billion and financed approximately 240,000 affordable housing units for residents of Illinois.

Other financial partners in the development included The Richman Group and the Illinois Department of Commerce and Economic Opportunity. The construction and design team consisted of Worn Jerabek Architects, P.C., Morrissey Construction and Francis Associates. 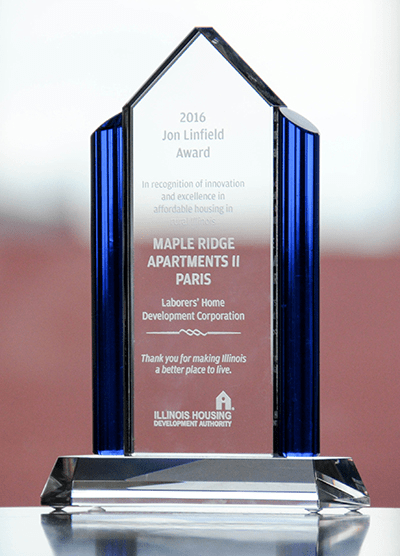